My goal this week is to use all of the vegetables we received in our Driftless Organics CSA box. For those not familiar with CSAs, it stands for "community supported agriculture" and every other week we get a box filled with fresh, organic, locally produced vegetables. We pay up front and receive 10 boxes over the course of the summer. Our insurance reimburses us for 2/3 of the cost, along with a note that thanks us for eating healthy!

Click here to read all about this week's bounty.

So many delicious vegetables! It's a mighty goal and I'm up to the challenge. Tonight's dinner used two items from this week's box and two items from a previous box. I stole this idea from my MIL who made this for us the week we came home from the hospital with our little dude: salad Nicoise.

The cucumber and grape tomatoes are from this week's box. The potatoes and green beans are from a previous box. The eggs are from the lovely ladies (chickens) next door and the olives, lettuce and artichoke hearts are from the Willy Street Co-op.

I paired the salad with locally made crusty bread. My mister had a hankering for meat, so he paired his elegant salad with a hotdog. I'm not kidding.


I had an almost-empty bottle of mustard in the refrigerator, so I made the vinaigrette right in the bottle. I added honey, olive oil, brown rice vinegar, fresh chopped garlic, salt and various spices. It was easy to shake in a tightly sealed bottle and even easier to squirt on the salad. So good!

I rounded out the meal with a tasty handcrafted brew. It was a great meal and I look forward to the others I will make this week!

Tomorrow morning: mellon!
Posted by Bonniejean at 11:02 AM No comments:

Hello out there! It's been far too long, I know.

See, I had a seriously cute baby and that's taken up some time.


For a while I blogged over here: http://inmytummy2011.blogspot.com/ ... but that is really a pregnancy blog, so I decided to return to my original Pear Flavored Bean to start back up!

Today was a busy day, I took Mister Dude into work for a retirement party, we swung by the Co-op for some quick grocery shopping and then we went for a walk with Red, who is expecting her own little bundle of joy in January!

For dinner I made a dish I'd been dreaming about for days. I'm not sure if it's the excessive amount of British mysteries (Foyle's War, Inspector Lewis, Midsommer Murders, etc...) that I've been watching during my maternity leave or the Olympics, but I've had a serious hankering for bangers and mash. And tonight was the night to make that dream come true. 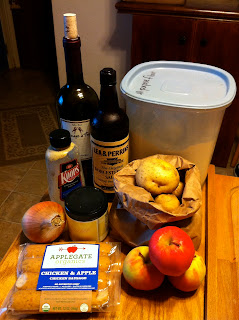 I browned the sausages in a skillet, in about 1 T of olive oil. 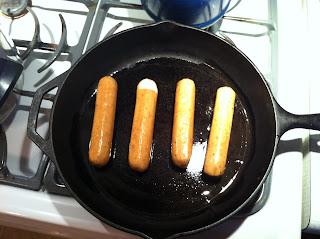 Then I added the sliced apples and another tablespoon of olive oil. 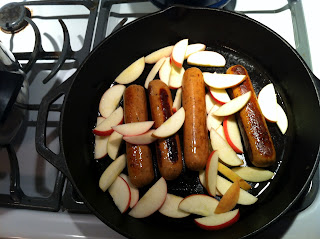 Then I added some chopped onion and a tablespoon of mustard. 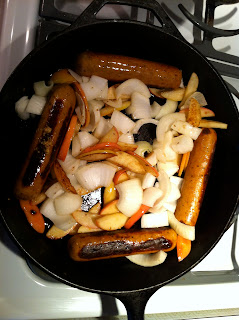 This is where I forgot to take photos. I added about 3 Ts of flour and whisked in about a cup of chicken stock, a few splashes of worcestershire sauce and a about a quarter cup of wine. Then I simmered for a half an hour, while the potatoes boiled. I mashed the potatoes with earth balance because I'm staying away from dairy while I nurse. 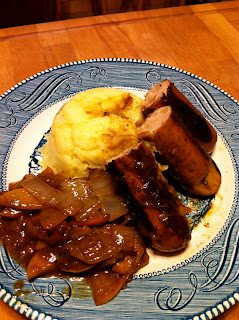 I have a good little helper in the kitchen! 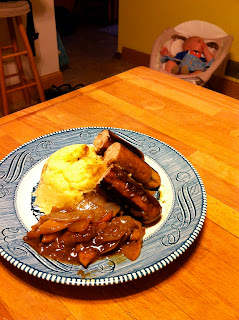 I paired the delicious meal with a locally brewed porter. It was so enjoyable! 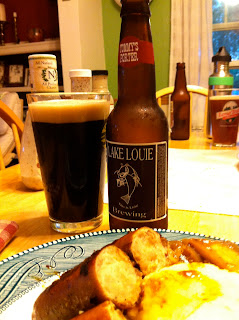 Mr. Z and I took an impromptu trip to Dubuque this weekend and had a really great time! It was a weekend filled with two of my favorite things, good food and fun art. In fact we found art everywhere we looked!

Our first stop was in Dickeyville to see The Grotto, a beautiful shrine erected by a Catholic priest in the 1930s. 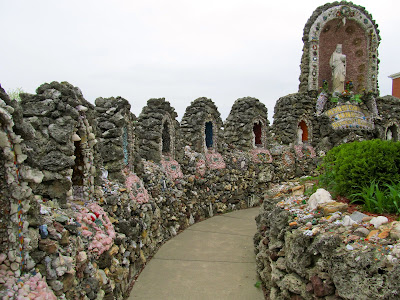 It's made up of colorful rocks, shells and glass and it's quite a site to see. 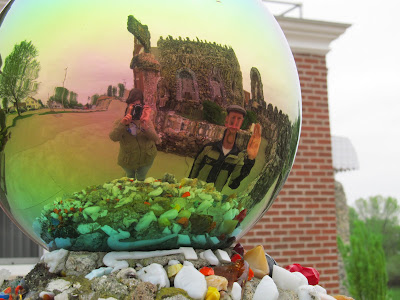 Next stop, Dubuque. A river town filled with tug boats, and barges and locks... oh my! 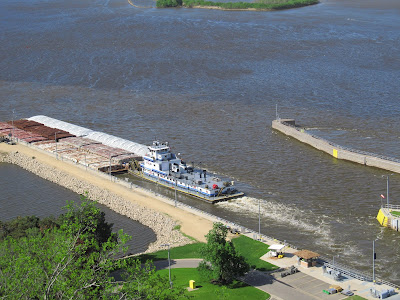 Dubuque also features an "elevator" or little street car that makes its way up a very steep hill in the middle of downtown. After a tasty lunch at The Bank (a restaurant that used to be a bank and still features old, original vaults) we took a spin up the elevator. It was a little scary, but lots of fun. 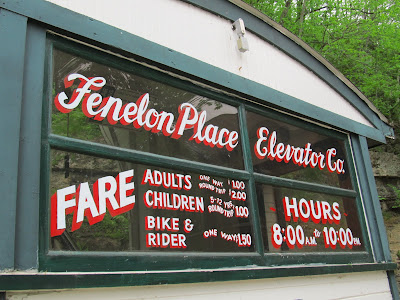 After our trip up and down the hill, we walked over to the river walk, which features some beautiful art.

These two horses are amazing. 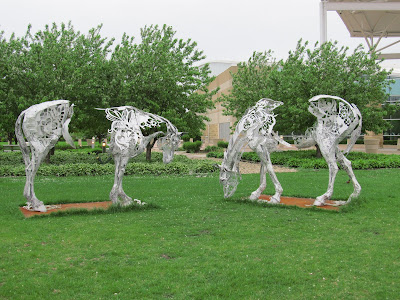 The attention to detail is unreal. 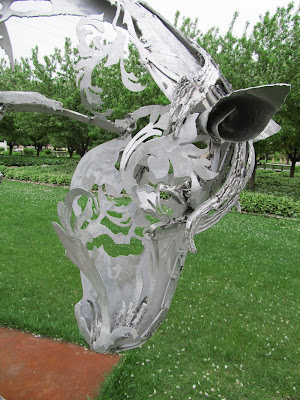 Another stop along the river walk was this old phone booth converted into a prayer station. We weren't sure if this was another piece of art or not. Either way, it looks like it's being used (knee pad is worn) and it's pretty cool. 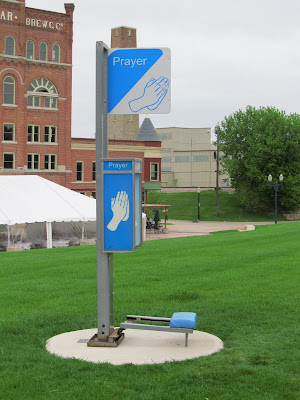 After our walk about town, we stopped back at the hotel for a cocktail and then decided on a place called Pepper Sprout for dinner. 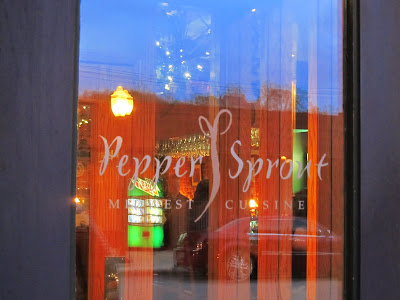 I had the bison tenderloin with balsamic onion jam and horseradish cream sauce over garlic mashed potatoes. Yes, it was as amazing as it sounds. I think (I've never tried) it's hard to get bison right, because it's so low in fat it dries out quickly. But this was seriously delicious stuff.

And we even found art at the restaurant. 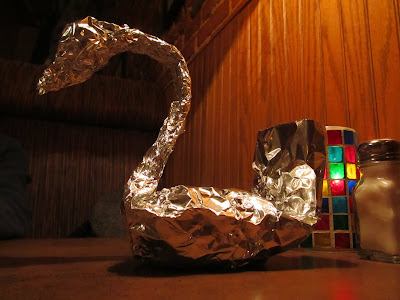 Don't be fooled. I ate my entire meal, these are Mr. Z's leftovers.

Most of today was taken up at the National Mississippi River Museum and Aquarium.

When Mr. Z and I go to museums, we have a plan. We pick a time and place to to meet up and then I cruise the museum stopping at all the audio/visual displays and anything else that's pretty or sparkles and he reads every single sign and description posted. So you see, every time I go to a museum with my mister, I can plan on substantial "me time" built in at the end and Mr. Z gets to take his time pouring over the artifacts.

Today, I spent some of my extra time snapping photos (do you see Mr. Z way back by the propellers?). 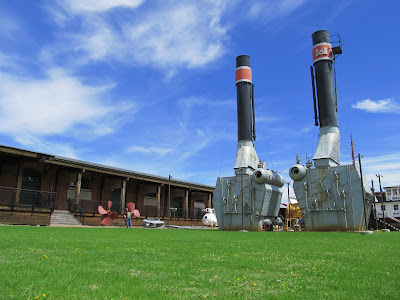 Of course we couldn't leave the museum without saying hello to our favorite river friend Samuel Clemens, a.k.a. Mark Twain. 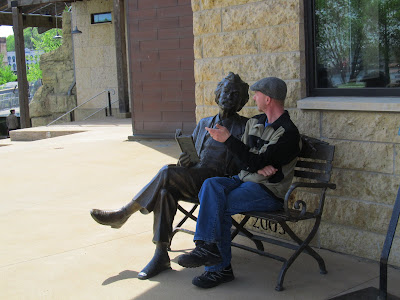 All in all we had a wonderful weekend. If you haven't spent time in Dubuque I highly recommend it!
Posted by Bonniejean at 8:57 PM 1 comment:

One of the things I like best about weekends is making breakfast. Especially when our neighbors are supplying us with fresh eggs from their backyard chickens.

This morning I whipped up two different egg dishes to suit our individual tastes... 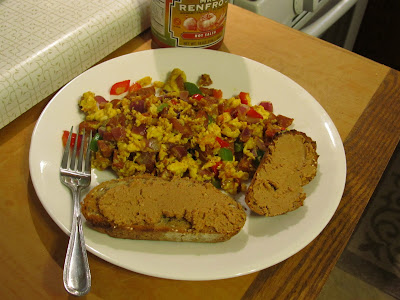 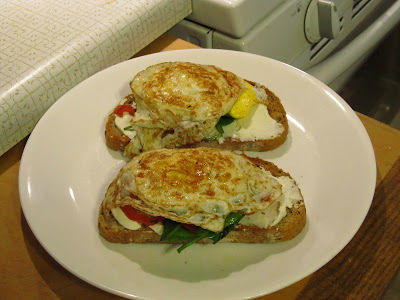 I fixed myself two open faced sandwiches on wholegrain toast with cream cheese, sauteed red pepper and spinach and an egg on top.

Both plates filled with protein and nutrients to start the weekend off on the right foot!
Posted by Bonniejean at 9:55 AM No comments:

Spring (or summer?) is here!

Yesterday was so beautiful. Mr. Z and I took advantage of the weather by cleaning the house. I know... not exactly fun. But it's great when you can do spring cleaning with every single window in the house open!

We finished off the day with pineapple shakes. 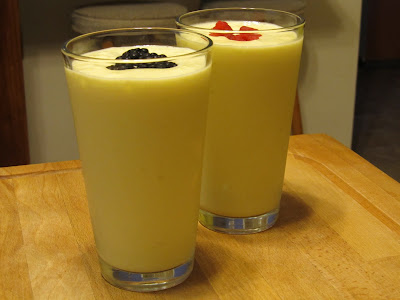 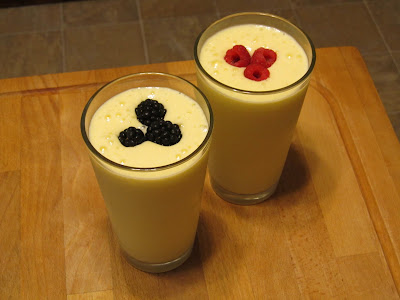 Days like yesterday are so good for the soul. After a long, stressful Madison winter, it was heartwarming to see families on bike rides, kids playing in the yard and tulips poking their head out for sun. These are the ingredients of a good life.
Posted by Bonniejean at 7:09 AM 3 comments:

WE SHOULD BE SO PROUD!

Mr. Z returned home last night after a week on the road. We had plans to drive to Milwaukee for a post-Christmas party, so I hadn't planned something for dinner. However eight hours on the road was enough for him in one day, so we decided to stay home.

Gasp! What's a wife to do when her husband is hungry, tired and been eating at restaurants all week? Tear apart the kitchen, that's what!

I had some kale sitting in the bottom of the fridge for almost a week. This was the perfect night to turn it into something delicious. I sauteed onions and garlic, threw in some balsamic vinegar and red wine and reduced it until it was a thick sauce. Then I threw in the chopped kale. 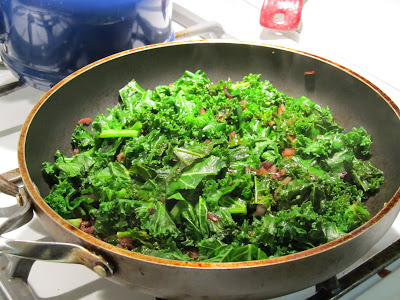 Then I used the spinach I had been saving for green monsters as the base for a salad. We had some sad carrots begging to be used, along with a stalk of celery. Presto! A healthy salad. 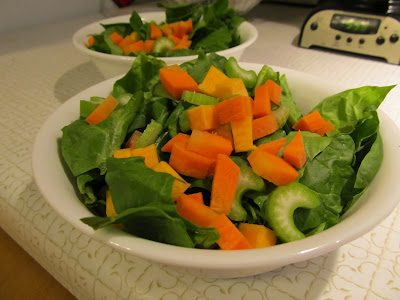 And for the main course, you ask? Stouffer's! This lasagna magically appeared a few weeks ago in our freezer. It didn't look like something Mr. Z would have purchased on his own, especially since I do most of the shopping. As you can see it is "large size," which means it's more than enough for two hungry nibblers. But still... where did it come from? 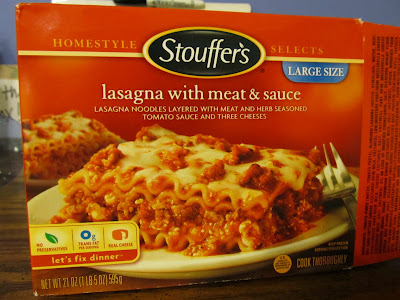 It turns out that this was a gift from Mr. Z's lovely mother. She a no-cottage-cheese-in-the-lasagna kind of girl. Which is perfect, because I LOVE cottage cheese in the lasagna! And this unexpected treat completed the dinner perfectly! 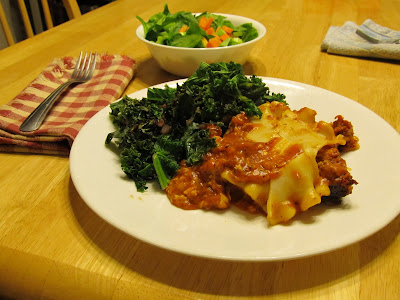 Thank heavens for microwavable main courses, mothers in law and safe returns home!
Posted by Bonniejean at 7:30 PM No comments: